In 2016, Crimson Cup Coffee & Tea celebrates 25 years of coffee+community! This is the fourth in a series of blog posts about the milestones we’ve achieved along the way.

In 1996, Greg met with Erich Gellner, an entrepreneur who wanted to open a coffee house in Columbus, Ohio. Erich was looking for a coffee roaster to supply his beans.

As they talked about Erich’s concept for his new venture, Greg shared his “7 Steps to Success” service platform.  He offered advice on every aspect of coffee house operations, including how to:

Following these 7 Steps, Erich opened Java’s Cyber Espresso Café in April 1997 in the Columbus suburb of Gahanna. The coffee shop soon had all the business it could handle, and Erich began looking to expand. Just four years later, he opened a second location in the Greater Columbus Convention Center. 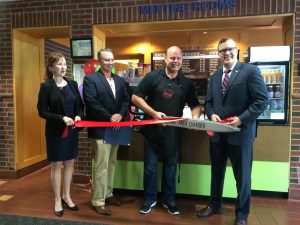 In 2004, the original Java’s moved down the street into a new drive-thru location in Gahanna’s Beecher Crossing Center. In 2010, Java’s expanded to a third location in the Columbus Public Library’s Main Branch. And, in August 2015, Erich’s fourth location opened in the library’s Gahanna branch.

Java’s became the first independent coffee house to grow using Crimson Cup’s 7 Steps to Success. In the coming years, it would be joined by more than 250 others across 29 states.