In 2016, Crimson Cup Coffee & Tea celebrates 25 years of coffee+community! This is the third in a series of blog posts about the milestones we’ve achieved along the way. 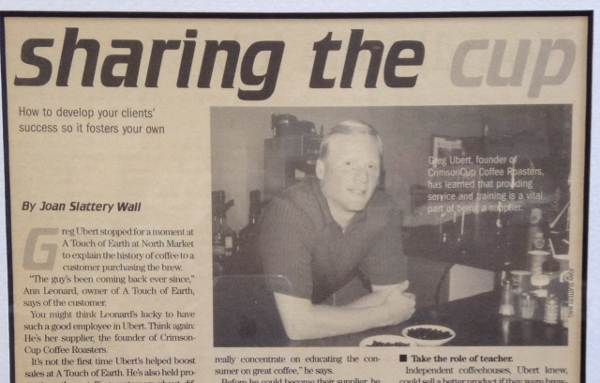 Greg now had great coffee, but he saw that some of his coffee house customers were struggling to make a profit. This presented a serious threat to Crimson Cup’s growth.

So he decided to invest in his customers by sharing his growing expertise about coffee house operations. He believed (and still does) that mutually beneficial relationships are stronger and last longer.

Accordingly, he began developing a service platform he called “7 Steps to Success,” which became the basis for Crimson Cup’s coffee franchise alternative program. Through this unique program, Crimson Cup would entrepreneurs how to open successful independent coffee houses and help them stay in business.

Greg decided to offer the 7 Steps platform as an alternative to high-priced coffee shop franchises. So he added the consulting services as a value-added benefit for his customers. With no franchise fees or royalties. No complicated contracts or business restrictions.

And so, within a year of founding Crimson Cup, Greg had brewed up a unique formula that would drive success for his company and its customers alike for decades to come.