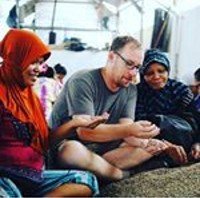 Coffee Buyers Dave Eldridge and Brandon Bir recently returned from a sourcing trip to the island of Sumatra, Indonesia. Their goal was to discover new coffees and find ways to support small farmers through our Friend2Farmer direct trade program.

Landing in Medan on the island of Sumatra, Dave and Brandon cupped coffee at several co-ops for three days straight. “We cupped everything we could get our hands on – which was hundreds of samples from all over Indonesia – not just Sumatra,” Dave said. “Some nights we continued cupping until 9 p.m. Traditionally, Sumatran coffees have a unique, earthy taste, but we encountered an eye-opening variety.”

Small-plot farming on Sumatra is smaller than in Central America, where Crimson Cup has formed the majority of its direct trade relationships. “Many of the farms are only a couple of acres in size – making it difficult to track large quantities of coffee to a single farm,” Brandon said. “And, since the beans ripen gradually over seven to eight months of the year, individual harvests are very small. It’s common for farmers to leave a bag of ripe coffee cherries at the end of a driveway for processors to pick up. You can also buy beans at open-air markets. All of this makes it difficult to track large quantities of coffee to individual farms.”

After leaving Medan, the team spent two days visiting coffee farms and processing facilities near Lake Toba area, a volcanic crater lake in northern Sumatra. Upon their return to Medan, Eldridge and Bir continued to cup coffee to narrow down their favorites. “We left a cupping to take a taxi to the airport,” Dave said. They took samples back to Ohio for evaluation using Crimson Cup’s roasters.

Aside from the coffee, the buyers were most impressed by the hospitality of the people on Sumatra. “You won’t find nicer people anywhere,” Brandon said. “If you look confused, someone will come up and try to help. At one point, our scooter ran out of gas – and some people came up with gas in a plastic baggie.”

The coffee scene in Indonesia continues to evolve, with some making efforts to standardize sourcing and processing. We’re planning another buying trip early in 2016.