Cuppa Austin in the News! 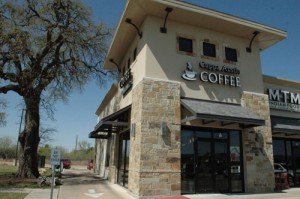 Has it been almost a year already? It seems like yesterday that we were helping owners Alan and Michelle Stewart open their Cuppa Austin coffee shop at 9225 W. Parmer Lane in Austin, Texas. But that was February 2013.

Since then, Cuppa Austin has been wooing repeat customers with great coffee and a unique space. They recently scored some positive ink in the local Community Impact newspaper.

As writer Stephen Burnett observes, a key element of Cuppa Austin’s recipe for success includes a space where customers “… can play board games, and there are plenty of plugs for charging computers and smartphones. The walls feature paintings for sale by local artists.”

Live performances by bands from multiple genres add to the shop’s Austin aesthetic.