This story of how we developed our new Friend2Farmer® Honey-Processed Amazonas Cecanor was crafted by Coffee Buyer Dave Eldridge. 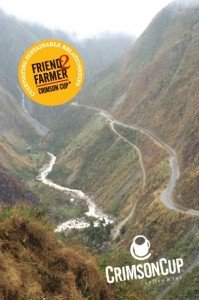 In the summer of 2013, I finished a cupping of Peruvian coffee and was ready to call my importer and talk about the samples. I imagined the same conversation that had taken place many times regarding the Peru’s we purchase. Of course some samples were nicer than others; let’s talk availability given the rust situation and plan around our needs in late 2013 through 2014.

Our conversation gravitated towards a farm that been particularly deflated by the rust and coffee prices at that time. Owners Raul Yañis & Elianita Oblitas had expressed real concerns about the future of growing coffee on their land, given that the prices were around 120 back then. Their farm is located outside the Town of Cocochó, at an elevation of about 5,500 feet.

Raul and Elianita are the kind of farmers who can help improve coffee quality and sustainability in the Amazonas region of Peru. Raul is a trained veterinarian. One of their two daughters is studying agronomy with a Cup for Education Scholarship. The manager of the Central de Servicios Cafetaleros del Nor Oriente (CECANOR) co-op said the couple had one of the best-managed farms in the region. They had invested in irrigation systems, composting and covered drying racks to protect their coffee from rain and moisture. We decided we wanted to invest in them through our Friend2Farmer® direct trade program.

I asked if he would consider setting some coffee aside and trying a honey process. Our thinking was that we could offer a higher price for the coffee, as he should be compensated for the extra attention required to produce the honey coffee. After a few days Raul replied that he would do it if we supplied the procedure and, of course, committed to purchasing the coffee no matter what came of it.

Naturally no one can expect him to take the risk by himself, so we committed to buying 7 bags of the coffee no matter what came of it.

A friend in Guatemala, Q Grader Jorge De Leon Ovalle, agreed to write the honey procedure and communicate it to Raul. As questions came up, the two worked closely together until the coffee was ready. Again, the grower and importer wanted to ensure we weren’t going to bail out if we didn’t like the coffee. I assured everyone involved that a deal is a deal.

When the first samples arrived, the importer told me that if I didn’t want to purchase it all I didn’t have to. “Is it that good?” I asked. He promised that it was.

In fact, it was wonderful – better than we could have expected. It easily was the best of the samples we received from last year’s Peruvian crop.

We’re proud to offer Friend2Farmer® Honey Processed Amazonas Cecanor for a limited time. Lightly roasted, it displays notes of stone fruit, caramel and agave. You can try a hand-poured cup at our Crimson Cup Coffee House in Clintonville or order a bag to brew at home.