How Coffee Fueled the Civil War 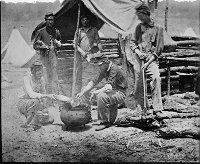 We found Jon Grinspan’s  New York Times story about the role of coffee in the Civil War absolutely fascinating.

Who knew that William McKinley’s heroic coffee run would help fuel the Union army during the bloodiest single day of combat in American military history – and help propel him to the presidency decades later?

As Grinspan writes, “It was the greatest coffee run in American history. The Ohio boys had been fighting since morning, trapped in the raging battle of Antietam, in September 1862. Suddenly, a 19-year-old William McKinley appeared, under heavy fire, hauling vats of hot coffee. The men held out tin cups, gulped the brew and started firing again. ‘It was like putting a new regiment in the fight,’ their officer recalled.”

Grinspan describes in vivid detail just how vital coffee was to military life a century and a half ago. Boiled, unfiltered, in little pots of often muddy or brackish water, coffee “… was often the last comfort troops enjoyed before entering battle, and the first sign of safety for those who survived.

Grinspan’s article filled us with gratitude for modern roasting and brewing methods and reminded us of how much we owe to those who have answered America’s call to duty. Thank you for your service!

Today, coffee remains an invigorating source of energy and a cherished comfort for active duty soldiers. That’s why Crimson Cup donates coffee on request to any soldier serving overseas.

If you know someone serving far from home who would be perked up by a bag of fresh-roasted Crimson Cup coffee, just send a note to marketing@crimsoncup.com.