How to Make Perfect Irish Coffee At Home 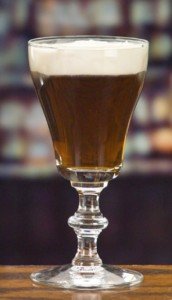 Every March 17, millions of Americans don green and celebrate the Irish with parades, good cheer, and perhaps a cup of Irish Coffee.

It’s likely that the Irish have been mixing whiskey and coffee since they first gained access to coffee. But legend says this heartwarming Cup of Joe was created in Ireland around the time of the second Word War by a man named Joe. But which Joe? According to Dublin’s Evening Herald newspaper, two different Irishmen hold claim to inventing the potion:

Regardless of its origins, this distinctly Irish drink is a delicious way to celebrate St. Patrick’s Day. Try our recipe for making perfect Irish coffee at home.