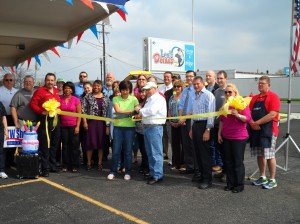 Congratulations to Terry and Andra Shortt, who celebrated the one-year anniversary of Leo’s Donuts and Coffee House on April 22. The coffee-and-donut shop opened after completing our Seven Steps to Success coffee franchise alternative program.

Leo’s features an espresso bar, fresh donuts and other goodies, free Wi-Fi and modern seating for up to 20 people in a bright dining room. Customers can also breeze through a drive-thru window to pick up their coffee and treats or enjoy their smoothies and lattes under a canopy on an outdoor patio.

Terry credits Crimson Cup with helping him set up a profitable business. “What sold me was the quality of Crimson Cup’s coffee and their system,” he said. “They sold us the equipment, supplies, coffee and other products and came here to train us. We didn’t have to figure anything out on our own.

“The training and marketing support we’ve received from Crimson Cup have been totally unbelievable,” he added. “Crimson Cup set us up for success.”

Two local radio stations interviewed Terry and Leo’s Donuts customers about their experiences over the past year. The Radcliff Small Business Alliance also hosted a ribbon cutting ceremony to commemorate the occasion.

We’re thrilled to see another independent coffee shop thrive in its local community and wish Terry and Andra many happy anniversaries to come.