Traveling to Expand Our Relationships with Peruvian Coffee Farmers 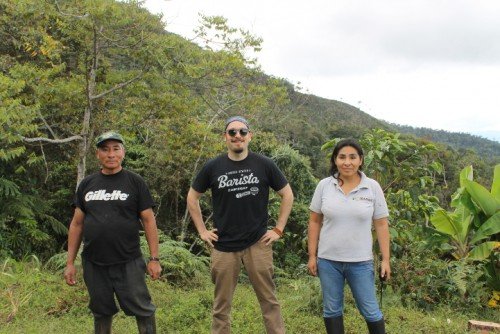 In July, Coffee Buyers Dave Eldridge and Brandon Bir, along with Customer Growth Specialist Taylor Harvey, traveled into Peru’s Andes mountains to meet with local coffee farmers. Their goal was to expand relationships with farmers who participate in our Friend2Farmer direct trade program and to discover new coffees.

The trio began their trip on Finca Santa Rosa near the small town of Villa Rica. This farm is owned by third-generation grower Selena Contreras Obregon.

Established by Contreras’ grandfather in 1927, the 104-acre, Rain Forrest Alliance-certified farm grows catuai, caturra, bourbon, typica and geisha varietals under a canopy of indigenous trees at an elevation of 1,600 meters. The farm produces about 750 bags each year of hard beans, which yield a super clean cup with notes of caramel, honey and cocoa. The coffee also displays nutty notes and mild citrus acidity in the finish.

“Selena and her farm continue to impress us with their passion for quality coffee and dedication to progress in every aspect of operations,” Brandon said. “Last year, we talked with them about the importance of improving their drying operations and helped them build a new drying bed. This year, they built enough raised beds to fill the entire second floor of their barn, which will help to expedite and control the drying process.”

The farm’s passion for improvement has extended to participation in a research by Lucas McClish, an environmental science student intern from The Ohio State University. Accompanied by the Crimson Cup team, McClish took soil samples on Finca Santa Rosa and nearby farms for a study that seeks to link soil conditions such as levels of nitrogen and potassium to the quality of coffee. 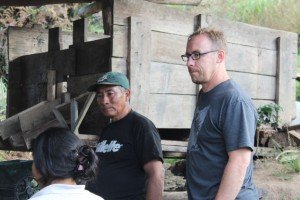 “Connecting small coffee farmers with the rich resources of The Ohio State University is one of the ways in which we’re helping to improve the quality and sustainability of coffee farming,” Dave said.

After Finca Santa Rosa, the Crimson Cup team visited a coffee warehouse in La Merced operated by Julio Arevalo Tello, who processes beans for a number of small-plot growers. There, Dave and Brandon cupped beans from a number of local farms. They also purchased cascara and cacao beans from Arevalo. Cascara, which means “husk,” “peel” or “skin” in Spanish, is the dried skins of coffee cherries, which are collected after the beans have been removed and dried in the sun.

“We plan to introduce cascara tea to Crimson Cup customers later this year,” Brandon said. “The cacao beans will be used in various infusions of our popular Nitro cold brew coffees.”

During cupping at the warehouse, two samples that stood out came from the farms of agronomist Nilda Barbosa Choque and her father, Pedro Cahuana Cconocc. The following day, the team visited both farms.

“Nilda’s farm was beautiful, with well-organized plants and shade trees on the mountainside,” Bir said. She and her husband had reforested much of their farm and had cleared and flattened some land to build a solar drier.

“They need a micro-loan to purchase the building material, and we’re interested in helping bring this project to fruition,” Dave added.

Like his daughter, Cahuana had invested in reforesting his farm, even taking some land out of production to establish shade trees. He was also growing a new varietal, Mondo Apache, which is a cross between Mondo Nuevo and Apache.

“This new varietal produced some of the best coffee we’ve cupped in Peru,” Dave said. “We’re eagerly anticipating the arrival of micro-lots from both farms at our Columbus roasting headquarters in August.”