Our second day started with a couple hours of car travel to get to our next destination, Coocacer Carmo do Paranaiba (coffee coop in the Cerrado growing region). This coop serves over 500 farms in the area and produces roughly 300,000 bags of coffee per year. The group was greeted by several of the coop officials, including the president. After looking at some of the most recent samples from local farmers, we took a quick walk around the facility to better understand the quality of coffee this coop produces.
The facility was very clean and looked somewhat typical, as they still used jute bags rather than the larger “one ton” bags seen in several other facilities inside Brazil. One observation of the shipping facility was how perfect the coffee bags were stacked. 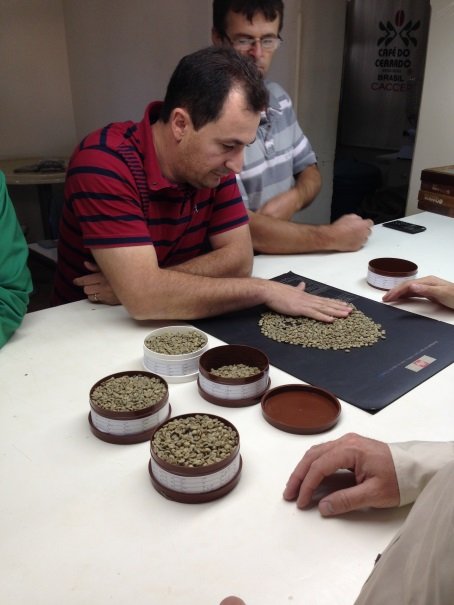 We couldn’t believe that people, not machines, were creating these stacks. After a look at what made the facility UTZ certified, we got into several trucks and made our way to one of the largest farms in the area.
During the thirty minute trip, we learned about the farm and the owner’s roots in the coffee business. We were told about the cleanliness and efficiencies of the farm and how they were leading the area in automation, irrigation, and total yield per plant. The owner of the plant also owned a tractor and farming equipment dealership, which helps him understand new technology when it first hits the market.
We arrived at fazenda Bravinhos at around mid-morning and met with the owner and some of his staff. They offered us coffee, pastries, and farmer’s cheese before we headed out to the processing plant. Looking around the facility was amazing. The cleanliness and efficiencies we were told about did not do the farm justice. 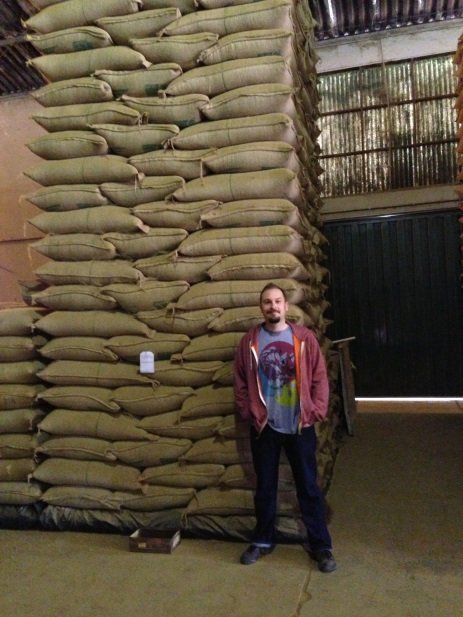 From the driers to the motorized rake, this farm was doing everything it could to run resourcefully. They even “skeletonized” their coffee trees instead of cutting them down after maturity. This is done to regrow limbs and produce new fruit, which yields more than the old growth.
After touring the entire farm, including his cattle ranch, we went back to the main house to say our goodbyes and travel back to the coop. Our drive back was filled with conversation and admiration of how productive and innovative the farm was. Before going back to the coop, we made a stop for lunch and were met by the entire staff of the farm we had just visited. The owner said he wanted to treat us to lunch as we gave up our morning to see his operation. 5lbs of beef and vegetables later, we got into the cars and began to travel to another farm to finish the day.
This next farm, fazenda sao Bernardo, was a bit smaller and less accessible than the last. We were told the farm produced only dry processed coffee and that they were trying some new processes to increase sustainability. We passed a pig farm driving into the main processing area and didn’t think anything of it (found out how important it was to the coffee). We met with the farm’s owner and some of his crew over a cup of coffee. He told us about his fair wages that exceed most farm around the area and his meal program to keep his workers energized and not hungry on the job.
We walked to his patio where there was another motorized raking machine that turned the coffee cherries on the patio to ensure even drying. We walked to the processing barn to see a giant shaker machine that separates the different grades of coffee. Once in the drying room, we noticed something strange. 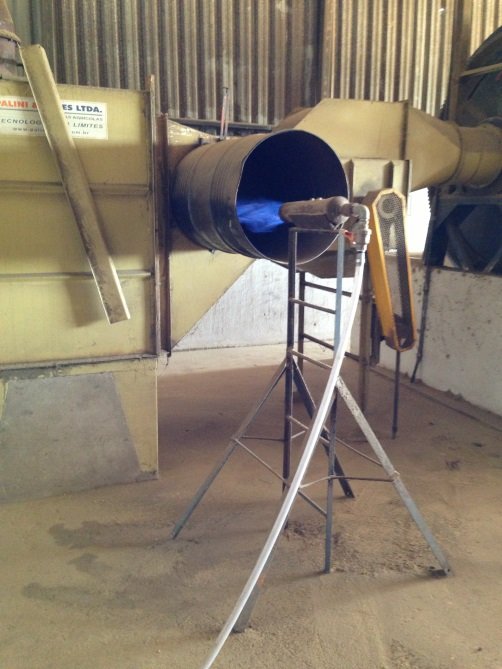 We saw a large burner hooked up to a hose that lead to the pig farm. The farmer noticed our inquisitive looks, smiled, and told us “pig poop” in a happy voice. The bubble we had seen outside the pig farm was actually capturing the methane gas from the pig manure and the farmer was using it to produce the heat to dry some of his coffee. We were amazed by this farmer’s innovation and sustainable practices.
Soon after the drying room, the sun started to set, and we had to get back on the road to make our way to the town were we staying in. We thanked the farmer for his hard work and we were off, another day in the books and more information to add to our expanding library of coffee knowledge.