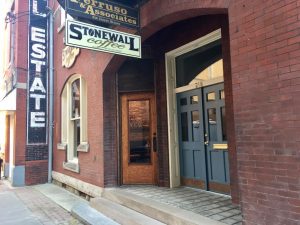 Owners Kevin and Sarah Zakariasen named the shop for Clarksburg’s most famous native son, Civil War General Thomas Johnathon “Stonewall” Jackson. A statue of Jackson sits in the plaza adjacent to the coffee house in front of the Harrison County Courthouse. 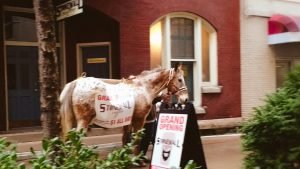 The shop’s December 6 grand opening featured $1 espresso-based coffee drinks all day as well as a Stonewall Jackson impersonator riding a horse around the coffeehouse. A portrait of Jackson painted from life also was on loan from the local library.

“We’re excited to support Kevin and Sarah in their new venture,” said Founder and President Greg Ubert. “Training entrepreneurs to run their own independent coffee shops is a big part of our success as a specialty coffee roaster and coffee franchise alternative.” 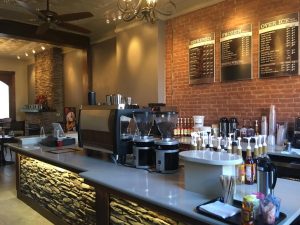 The Zakariasens and their children settled in Clarksburg five years ago after spending eight years as missionaries at an orphanage in South Africa. They realized that downtown Clarksburg was ripe for revitalization and saw an opportunity to strengthen the community through coffee.

To learn how to run a successful coffee business, the couple turned to Crimson Cup and our 7 Steps to Success coffee franchise alternative program. 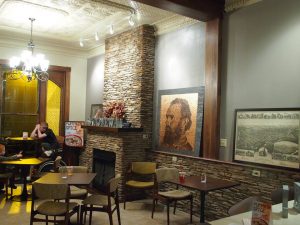 Initially, Kevin and Sarah were reluctant to purchase the 7 Steps book and to follow its tenets.

For example, despite the book’s warnings against used equipment, they purchased a previously owned espresso machine that proved unusable. Eventually, they decided to follow Crimson Cup’s guidance, which is based on experience with hundreds of independent coffee shops in 29 states, Guam and internationally in Bangladesh. 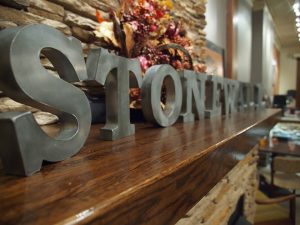 “Knowing what we know now, we would have paid much more than $69.99 for the 7 Steps book,” Kevin said. “It is one of the best investments we have made.”

Crimson Cup’s support for new coffee houses includes comprehensive training of owners and staff. 7 Steps Trainer Steve Bayless worked with the Zakariasens and remained on site for Stonewall Coffee’s soft opening in October. On the first day of operation, the Zakariasen family served more than 130 people, with a line extending out the door. 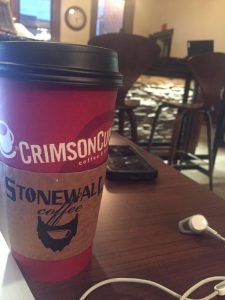 “It’s been really exciting and neat to see the community come out and say, ‘Hey, this is exactly what we needed here in Clarksburg,'” Kevin Zakariasen said.

The Stonewall Coffee menu features hot, iced and frozen espresso drinks – including mochas, lattes and cappuccinos – as well as iced coffee and tea, cold-brewed coffee, hot chocolate, fruit smoothies and other custom drinks. Comfortable seating and free Wi-Fi beckon customers to sit and socialize or catch up on work.

The shop is entirely family operated by the Zakariasens, their children and extended family members. The owners believe Stonewall Coffee will be a vital part of downtown Clarksburg’s revitalization. As Sarah noted, “To us, coffee is more than just a drink you drink while sitting in morning rush-hour traffic; it is an experience. It is a return home for the holidays. It is the successful conclusion of a mutually beneficial business deal. It is the celebration of surprising good news. It is the centerpiece of conversation, culture, and new beginnings.”