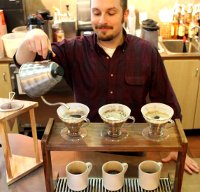 It’s easier than ever to enjoy hand-pour specialty coffee at home with our newly expanded home-brewing equipment selection. You’ll find popular siphon, drip and hand-pour systems from Hario, Chemex and Bodum, along with accessories such as digital scales and filters, in our online store and at Crimson Cup Coffee House in Clintonville. This is the same […]

Brew Up Some Love this Valentine’s Day

There’s no more romantic present than something shared – unless, perhaps, it’s a cup of wonderful coffee brought to you in bed. Recent research showing that coffee drinkers live longer makes this popular beverage an even more loving gift. Want to learn how to prepare the perfect cup for your sweetie?  Just check out our […]

Whether you’re hosting a Christmas dinner party or simply need a pick-me-up after assembling children’s toys, awesome coffee can be the star atop the tree of your Christmas celebrations. As the fabled silent night of Christmas Eve passes into dawn, the adults in your party will thank you for a superb cup of Joe to […]

The French Press, also called a press pot, coffee press, coffee plunger, or сafetière à piston, has been around since the late 19th century. It’s believed that a French gentleman came up with the concept. At the time, the most common method of brewing coffee was to boil ground beans in water and allow the […]

It’s amazing how small changes can make substantial improvements in the taste of coffee. Here are 10 secrets to brewing a perfect cup. 1. Know your beans. You can’t make savory coffee from so-so beans. Start with specialty grade, class 1, 100% Arabica whole coffee beans that have been roasted in small batches to ensure […]