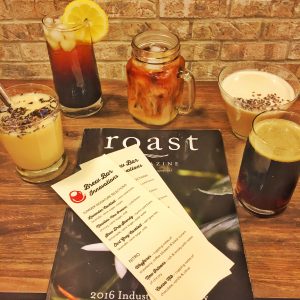 With the weather heating up, it’s time to cool your java down. And, you don’t have to settle for plain iced coffee this summer. With our cold-brewed innovations, you can taste a different chill caffeinated thrill every day of the week.

Cold brew, which steeps in room-temperature water, is much less acidic and bitter than hot coffee poured over ice. Because it’s more concentrated, it also has a higher caffeine content.

Offerings at our Clintonville and Upper Arlington coffee houses range from Kyoto tower coffee, brewed one drop at a time, to a series of Nitro cold brews and coffee cocktails.

Demand has skyrocketed since we introduced Nitro cold brew to Columbus in 2014. This effervescent iced coffee is infused with nitrogen under pressure and served from a keg tap – giving it the texture and mouth feel of a fine milk stout.

“Our coffee cocktails mimic a gin fizz,” said Coffee Sourcing and Education Manager Brandon Bir, who created the drinks. “We shake up the cocktail until the half and half creates tiny stable air bubbles,” he explained. “We then pour our beverage into custom glassware, where it settles into two layers.”

For tea lovers, we offer the Earl Gray Cocktail, a mixture of Earl Gray tea, lavender and milk poured over ice.

Our summer signature cold brews will be available through the end of the season at both Crimson Cup Coffee Houses – 4541 North High Street in Clintonville and 2468 Northwest Blvd. in Upper Arlington.