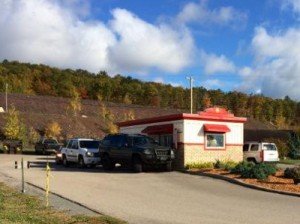 Jenni and Tom named their shop Edelweiss after Tom’s grandfather’s dairy farm. Edelweiss, a flower grown on the side of the Alps, has been a tie to their family for generations.

As recommended in Greg’s book, Seven Steps to Success in the Specialty Coffee Industry, a key feature of anniversary celebrations was offering drinks for just $1. Crimson Cup’s Jeremy Lowe was on hand to help with the throng of customers coming to join the celebration. 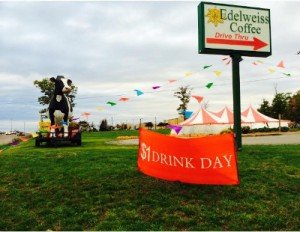 As a result of grassroots marketing, signage and social media marketing, Edwelweiss sold 1,500 drinks! During the day-long event, baristas were kept hopping serving at least two cars at a time at the drive thru, with a line of cars stretching to the major M-2 highway. 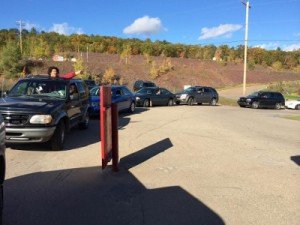 Despite the hectic pace, Edelweiss staff maintained an incredibly outlook, smiling and laughing as they greeted long-time customers and tons of new faces. The whole community has really rallied around this business to make sure that it stays in Iron Mountain for years to come.

Kudos to Jenni and Tom on creating such an awesome coffee house – one of the gems of Michigan’s Upper Peninsula! Everyone at Crimson Cup wishes you many more years of success.