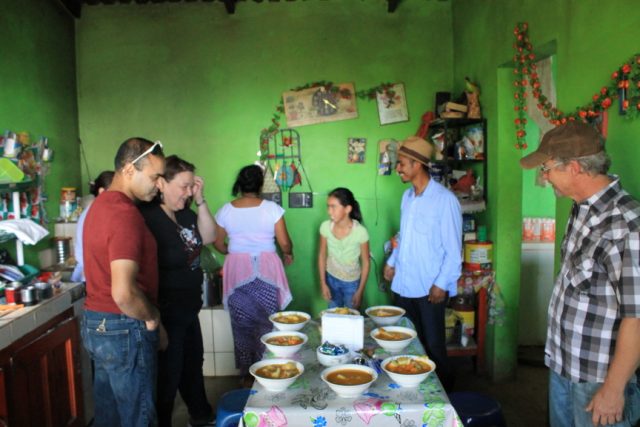 Our cuppers recently traveled to Honduras and Nicaragua to discover new coffees and develop relationships with coffee growers. They were accompanied by executives from The Ohio State University Office of Student Life, University Dining Services, as well as by a group of farmers from the Association of Producers of Olopa Coffee (Apolo) co-op in Olopa, Guatemala. Ohio State serves direct-trade Honduran and Guatemalan coffees roasted by Crimson Cup on campus.

“Our vision at Crimson Cup is to create a value chain of mutual benefit with coffee growers and customers,” said Founder and President Greg Ubert. “We believe that our success is grounded in the prosperity of our suppliers and customers.”

Coffee Buyer Dave Eldridge, Coffee Sourcing and Education Director Brandon Bir, OSU Senior Director of Dining Services Zia Ahmed and members of his executive staff began their travels in Siguatepeque, a region in the central mountains of Honduras known for its ideal climate, flowering gardens and coffee. There, they cupped new harvest coffees grown under a natural shade canopy of indigenous trees, returning with samples to roast in Columbus. 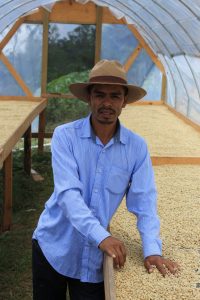 Next, they traveled to the nearby village of El Socorro de La Peñita. Since 2011, Crimson Cup has been working with local farmers and wet mill owner David Lopez to improve the quality and sustainability of local coffee and to make the community a better place to live and work.

In El Socorro, they were joined by Apolo President Arnoldo Cardona and Vice President Alvaro Lemus and his wife Liliana, who drove 8 hours to meet with Crimson Cup and OSU executives and learn from what they’ve done in Honduras. In 2016, the Apolo group traveled to Columbus to tour the Crimson Cup Innovation Lab and local coffee houses and to meet with students at OSU’s Connecting Grounds Café. Mr. Ahmed had previously traveled to Olopa as well.

“We were the first American roaster to visit the community of Olopa in 2015, and last year we signed a 3-year agreement to buy two containers of coffee annually,” Dave said. “This commitment is giving co-op members the confidence and cash flow they need to invest in agricultural improvements and their local community.” 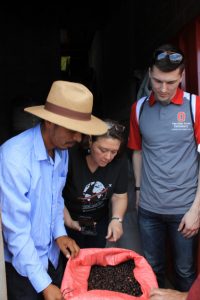 “We returned from this trip with a renewed relationship with the school and its new principal,” Dave said. “In addition, we laid the groundwork for expanded programming in the Siguatepeque region.”

On a previous trip, OSU students and Crimson Cup team members helped Lopez build a raised-bed solar dryer to better control the speed at which coffee dries in the sweltering Honduran sun. Since then, Lopez has built two more drying beds. “Solar drying helps the coffee dry more slowly and evenly,” Brandon said. “The resulting cup will be better than the same coffee dried on tarps, which will increase the value of the harvest.”

From El Socorro, the group traveled to Matagalpa, a city in the northern highlands of central Nicaragua that is the heart of the country’s coffee production. Dave visited the area in 2015 and purchased some of the coffees he discovered the following year.

“We returned to scout out new coffees and grow relationships,” he said. “The region produces some very fine Fair Trade Organic offerings, which are in high demand among our customers.”

In Matagala, the team visited several large coffee mills and cupped many different coffees from the new harvest. The trip concluded about an hour north in Jinotega, where they visited a farm and a smaller warehouse and cupped more coffees.

“We were pleased to discover some excellent coffees and have ordered samples for roasting,” Brandon said. “Our customers can look for some exciting new offerings later this year.”