“The legendary home of the first coffee trees, Ethiopia is the source of some of our favorite coffees, said Founder and President Greg Ubert. “We’re committed to expanding partnerships with farmers and co-ops there. We also are exploring relationships in Kenya, which produces some of the world’s most universally admired coffees.”

Brandon flew into the capital city of Addis Ababa and then to Jimma, the largest city in Southwest Ethiopia. The next day, he drove about two hours to the town of Bonga in the Keffa Zone. From Bongo, he rode on horseback for another half day to reach the Girma Eshetu farm, which sits in mountains between 6,500 and 7,000 feet in elevation in the Bita Genet District. The organic coffee farm takes its name from its owner, who has more than two decades of coffee-growing experience.

“The area has been suffering from a devastating drought, but it rained the night we arrived for the first time in six months. It was amazing to witness the excitement and celebration among the people living on the farm,” he said.

“The next morning, we did a farm survey to ensure that the farm was treating employees fairly, providing housing and other amenities, and to identify opportunities for growth and improvement in efficiency and sustainability of coffee growing and processing. We found that Girma offers a pretty good example of how to do things and how you should treat people.” 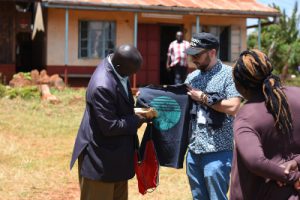 From Girma Eshetu, Brandon drove back through Jimma to Agaro. “I was happy to return to our favorite farm in Agaro – the Biftu Gudina Cooperative,” he said. This co-op produced Crimson Cup’s Ethiopian Jimma Agaro coffee, which won a 95 rating from Kenneth Davids and the Coffee Review.

“The manager of the co-op pointed out news clippings hanging on his wall that resulted from Crimson Cup press releases,” Brandon noted. “He thanked us for the attention we’ve brought to the co-op’s coffee and said he considered us partners, which is our goal in forming farmer relationships.” Crimson Cup is in the process of securing a fresh supply of the co-op’s coffee. 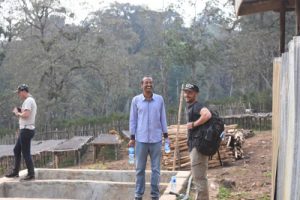 Returning to Jimma, Brandon met with a several coffee unions and cupped their coffee. From there, he returned to the Kossa Geshe co-op in Western Ethiopia’s Limmu Kossa District, which produces Crimson Cup’s Ethiopian Kossa Kebena coffee. “I shared news that their coffee had won a Good Food Award, and got a video of them speaking to consumers,” he said. We are awaiting samples of current-crop coffee from the co-op to roast and cup at our Innovation lab in a few months – stay tuned for a new supply later this year.”

After camping in the Kebena Forest, Brandon flew back to Addis Ababa, where he met with coffee unions, did a final cupping of Ethiopian coffees and conducted barista training for a local hotel. The Oromia Union expressed interest in having Brandon return for a week to train baristas in the Jimma area. 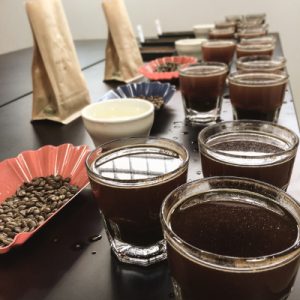 From Addis Ababa, Brandon flew into Nairobi and then traveled to Nairobi. There, he visited the Kenyan Coffee Exchange and Louis Dreyfuss Company offices. “Between the three sites, we cupped over 250 coffees – 750 cups in all!” he said. “We found a lot of cups we’re interested in.”

The next day, he drove to the Komothai co-op, which operates 13 wet mills in Kiambu County, central Kenya. “Due to drought and frost brought about by climate change, they saw a 30 percent reduction in production over the past year,” Brandon said. “Because production is going down, costs are rising. We expect that Kenyan and Ethiopian coffees will be especially hard to come by next year.”

Brandon spent two days inspecting coffee farms and wet mills. “Through our Friend2Farmer program we’re hoping to get involved in improving the wet mill processes at the co-op’s Kanake factory,” he said. “In a year or two, we’d like people to go to Kanake and say, ‘this is exactly how you double-ferment and wet-process coffee in Kenya.’”

While visiting the region’s farms, he found that many grew both tea and coffee. “We’re hoping to import both crops from one farm,” he said.

“Of course, it takes several months after we return from a trip to roast samples, place orders and receive imports of coffees,” Brandon said. “We hope to be offering some of the Ethiopian and Kenyan coffees I discovered later this year.”