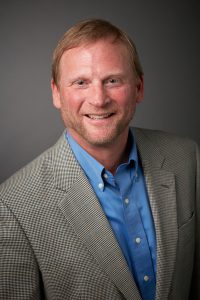 Greg Ubert, our founder and president, has been named a finalist for the EY Entrepreneur Of The Year® 2017 Award in the Ohio Valley region. The awards program, which is celebrating its 31st year, recognizes entrepreneurs who are excelling in areas such as innovation, financial performance and personal commitment to their businesses and communities.  Greg was selected as a finalist by a panel of independent judges.  Award winners will be announced at a special gala event on June 15 at the Hyatt Regency Hotel in Cincinnati.

“Having devoted my career to entrepreneurship and to helping other small business owners succeed, I am thrilled to receive this recognition,” he said.

In 1991, Greg founded Crimson Cup with little more than enthusiasm and a determination to succeed. After the recent Harvard graduate discovered he couldn’t fall in love with computer software, he left a promising career in Chicago to pursue twin passions for coffee and entrepreneurship. Greg moved back to Columbus and started a coffee roasting business with a tiny coffee roaster in a one-room office. With little business experience – and none in the coffee industry – he learned coffee roasting from the grounds up, without any formal training. From the start, his vision focused on providing the best-tasting coffee and coffee-house products to customers while creating a supply chain of mutual benefit with growers and suppliers.

After he saw that some coffee house customers were struggling, he studied their operations and developed a service platform called “Seven Steps to Success.” The program offered a unique proposition: Crimson Cup would teach entrepreneurs how to open coffee houses and help them stay in business. In 2003, he published Seven Steps to Success: A Common-Sense Guide to Succeed in Specialty Coffee. This book and Crimson Cup’s program have put more than 350 independent coffee businesses in 29 states, Guam and Bangladesh on the road to success.

Now in its 31st year, the Entrepreneur Of The Year® program has expanded to recognize business leaders in over 145 cities and more than 60 countries throughout the world.