A Drop of Coffee History: Kaldi and His Goats 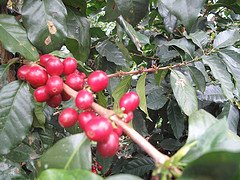 The coffee tree is indigenous to only one small African country: Ethiopia. So how did coffee become so popular around the world?

According to a popular legend, it all began with a young Ethiopian goat herder named Kaldi.  Many centuries ago, Kaldi found his goats bounding about the hillsides in a joyous frenzy. They were having a ball! Even the old and tired goats were prancing around and acting young again.They didn’t even sleep at night.

Kaldi felt confused. Tired and worn out from trying to manage the rambunctious goats, he watched them carefully to discover their secret. After finding them eating bright red fruit from a nearby tree, he tried some of the fruit himself. Suddenly, he felt invigorated.

Kaldi’s discovery might have remained his secret, but one day a monk from a nearby monastery came upon the herder and his goats and asked how they got all their energy. The monk ate from the plant and he, too, felt revitalized. He brought some coffee cherries back to the monastery to help the monks stay awake during long religious services. Soon all the monasteries used coffee as a part of their services.

During the 5th and 6th centuries A.D., Ethiopians invaded the part of the Arabian peninsula now occupied by Yemen and brought some of their magical seeds. Enraptured by the fruit’s invigorating and stimulating properties, the Arabs became the first people to cultivate coffee plants. In fact, the first recorded word for coffee is in Arabic. It is qahwah (KAH wah), meaning “Arab’s wine.”

The Arabs also were the first to trade in coffee. By the sixteenth century it was known in Persia, Egypt, Syria and Turkey. By the next century, coffee had made its way to Europe and was becoming popular across the continent. Less than 100 years after that, coffee had become a major trade crop. Today, it is the world’s most valuable commodity after oil.

Ethiopia still produces some of the world’s finest coffees. Many are organically grown and hand-processed according to centuries-old tradition. At Crimson Cup, we’re proud to offer Ethiopian Yirgacheffe, with its gentle flavor, fruit-like acidity and flowery brightness, among our single-origin, fresh-roasted coffees.

Categories Coffee | Coffee+Community | What's New at Crimson Cup
Franchise or Independent – Which Coffee House Business Plan is Right for You?
A Few Great Books About Coffee