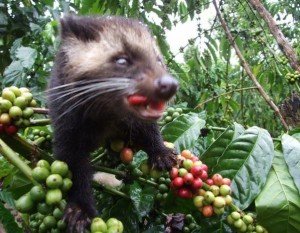 Most java junkies probably know that Kopi Luwak is the world’s most expensive coffee, typically selling for $100 per pound and up to $50 per cup in fine restaurants. Consumed primarily in Japan and other Asian markets, Kopi Luwak gained worldwide fame in the 2007 comedy, “The Bucket List.”

Jack Nicholson’s character, billionaire Edward Cole, meets Morgan Freeman’s character, mechanic Carter Chambers, in a hospital cancer ward. Despite differences in class and character, the two bond over their shared illness. Facing mortality, each makes a list of the things he wants to experience before he “kicks the bucket.”

Somewhat snobby and pretentious, Edward is a big fan of Kopi Luwak, which he drinks for its cost and rarity without an inkling of its origins. Carter crosses”laugh until I cry” from his bucket list after passing Edward a note telling him that Kopi Luwak is harvested in Indonesia from the defecation of the cat-like palm civet.

Civets eat coffee cherries, digest the fruit and excrete the beans, which are then harvested by hand before being washed and processed. Researchers think the coffee’s distinctive aroma and flavor derive from the civet’s digestive enzymes, which break down some of the coffee proteins.

We’re not advocating that you put drinking Kopi Luwak on your bucket list or serve it at your coffee shop. But it does raise a couple of considerations for coffee shop owners:

And, unlike coffee shop franchises and most consultants, we don’t charge a dime for our consulting services.

You can get started by reading Seven Steps to Success in the Specialty Coffee Business, which reveals inside information on how to create a successful coffee business from Crimson Cup’s president. Or you can fill out this form or call 888-800-9224 to speak with one of our consultants.