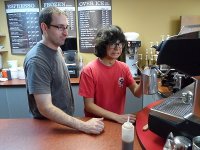 So what is a cupper, you ask? At Crimson Cup, it’s someone who lives for coffee. Our Cuppers have invested long hours – in most cases, years – in learning to objectively assess the quality of coffee. Each of our Cuppers brings a unique palate, set of skills and personality to our mission of consistently roasting the best-tasting coffee. This is one of a series of interviews with our Cuppers. 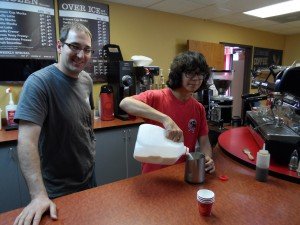 Steve Bayless joined Crimson Cup in 2008 as general manager of the new Crimson Cup Coffee House in Clintonville. After graduating with a history degree from Ohio State University, he had worked at food service operations ranging from Subway to Barcelona to Katzinger’s Deli, gaining experience as a line cook and manager.

“I had been working at restaurants that were Crimson Cup customers, so I was familiar with the quality of the coffee, but I knew more about restaurant management than coffee,” he recalls. “I didn’t know the difference between an a latte and a mocha. I think that’s one of the reasons Greg hired me – I didn’t think I knew everything and was open to learning!”

Over the next three years, Steve used Crimson Cup’s Seven Steps to Success program to build the coffee house into a successful model for other independent coffee houses. Then, in May 2011, began teaching prospective entrepreneurs how to open and run their own coffee businesses.

As a 7 Steps Trainer, Steve has helped open coffee houses in 14 of the 28 states where Crimson Cup coffee is sold. He’s seen almost every possible setup for a coffee shop – kiosk, drive-thru, walk-in, and walk-in/drive-thru combinations. Steven has helped businesses thrive in spaces ranging from 92 to 2,000 square feet, in small towns of 5,000 and major cities such as Boston and Detroit. He’s also set up coffee operations in existing restaurants, donut shops and colleges and universities.

Steve spends 30 to 40 percent of his time on the road, teaching owners and staff of new coffee shops everything they need to know to run a flourishing business. He typically trains on site for five days, then returns six to eight weeks later for the grand opening to ensure each business is off to a profitable start.

In addition to designing and conducting classes such as Barista 101 and Marketing 101, Steve collaborates with the coffee buying and roasting team to cup the new coffees. “I’m always getting to try new things here. I stop in the cupping lab to taste fresh crops and do cuppings and less formal tastings.”

His favorite drink is the Costa Rican Rio Negro in a Chemex. “There’s something really bright and fruity about that coffee.”

But what he really loves about coffee is the way it creates communities. “It draws people together, introduces strangers so they become friends.” And that’s what he hopes to do later this year during separate trips to Maui and Tanzania.