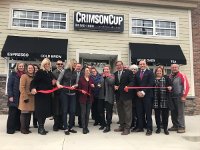 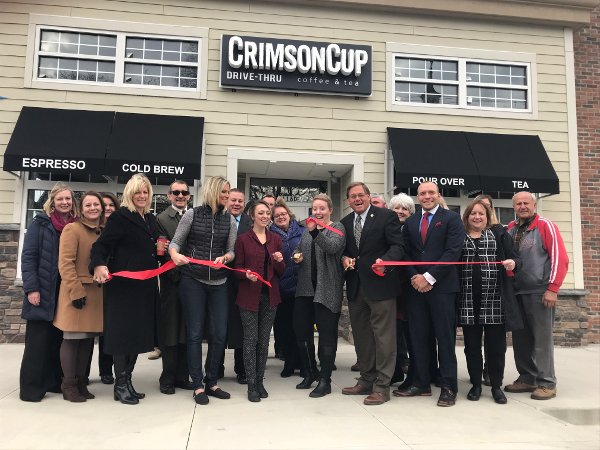 Crimson Cup has expanded into Northeast Ohio with a new Crimson Cup Coffee House at 116 Tallmadge Circle in the Akron suburb of Tallmadge, Ohio.

“We’re excited to bring awesome coffee to the Tallmadge community, which has been very welcoming,” said Founder and President Greg Ubert. “This is our first company-owned Crimson Cup Coffee House outside our home market in Columbus.” The roaster operates coffee houses in the Columbus suburbs of Clintonville and Upper Arlington as well as in the Discovery Café within the Greater Columbus Convention Center. 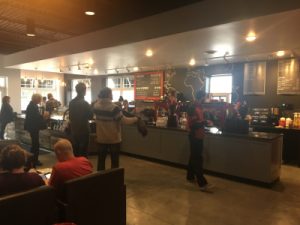 During the shop’s grand opening celebrations on December 6, the Tallmadge team, led by Coffeehouse Manager Rachel Friend and Coffeehouse Assistant Manager Marissa Ratkovic, served 979 drinks to an eager group of Tallmadge customers who had great things to say about the quality of the coffee and service. The shop has received 26 five-star reviews since opening. 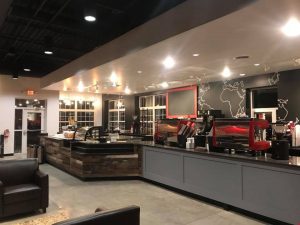 The 2,000-square-foot coffee house sits on one end of a newly built retail strip near the near the Tallmadge Town Square Historic District. “More than 40,000 motorists pass through Tallmadge Circle every weekday – making this a fantastic location for a coffee house with drive thru,” Ubert said. The store interior was designed by Columbus-based Kimberly Orr of Kimberly O Design, who also designed the Crimson Cup Innovation Lab and Upper Arlington coffee house. 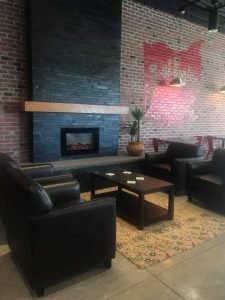 Inside, a gas fireplace anchors a brick wall on one side of the new store, flanked by comfy leather chairs and a coffee table to encourage conversation. An Ohio logo screened onto the brick wall connects the brand to its Columbus roots and will be a staple feature of Crimson Cup Coffee Houses as the company expands. Groups of tables and chairs provide ample work and meeting space. Free Wi-Fi helps customers get down to work, while a drive-thru caters to coffee lovers on the go. 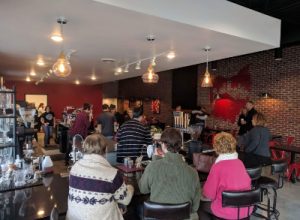 In addition to brew bar offerings, the new coffee house serves a full menu of hot, iced and frozen espresso drinks – including mochas, lattes and cappuccinos – as well as iced coffee and tea, cold-brewed coffee, hot chocolate, fruit smoothies and other custom drinks. Breakfast sandwiches, heart-healthy oatmeal and award-winning local treats from Linda’s Kitchen in Tallmadge round out the menu.