Reading the Leaves: The Legendary Origins of Tea 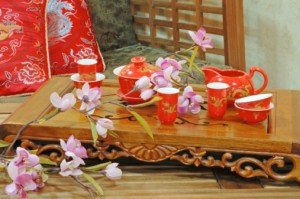 According to Arab folklore, coffee was discovered by dancing goats several hundred years ago. But tea — the world’s most popular beverage aside from water — has a longer and more genteel history.

Chinese folklore credits Emperor Shen Nong with discovering the energizing properties of the tea plant about 5,000 years ago, in 2737 B.C.E. He also is remembered as the father of agriculture and the inventor of Chinese herbal medicine.

The emperor demanded boiling of drinking water as a hygienic precaution. While traveling through a distant region one summer day, the emperor and his court stopped to rest. As his servants boiled water for the court to drink, dried leaves from a nearby bush fell into the boiling water, turning the water brown. As a scientist, the emperor was interested in the new liquid, drank some, and found it very refreshing.

The tree was a wild tea tree, camellia sinenses, an evergreen shrub related to the magnolia that develops fragrant white, five-petaled flowers.

For thousands of years thereafter, tea appeared only sporadically in Chinese history and literature, primarily as a medicinal herb. It was not until the Tang and Song Dynasties that it became a popular beverage.

In the 8th century, Tang Dynasty scholar Lu Yu elevated the status of tea drinking by publishing the first definitive book on the subject. Cha Ching or The Tea Classic, remains in print today.

The first tea shops appeared in China during the 12th century, about the time that Song Dynasty Emperor Huizong further enhanced the popularity of the beverage. His Treatise on Tea became the definitive work on the elaborate Chinese tea ceremony.

Tea made its way to Japan in the 9th century, but it would take several hundred more years before European traders arrived in China and began exporting tea leaves around the globe during the 16th and 17th centuries. China was the world’s only tea-exporting country until the 19th century, when India and Ceylon began to grow the plant commercially.

Today, more than 40 countries produce tea, and billions of people around the world — including half of all Americans — drink tea daily.