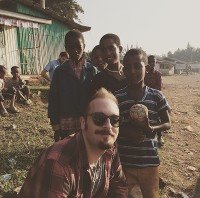 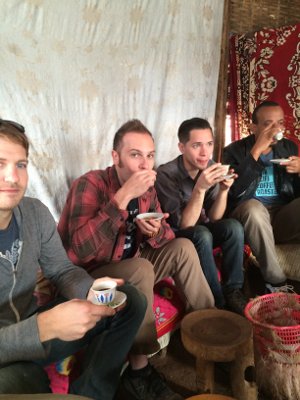 Ethiopia was the source of two of the three coffees we submitted for cupping as part of our winning Roaster of the Year application. Looking to the future, we want to discover new coffees and build relationships with Ethiopian coffee growers.

“Ethiopia’s model is very different compared to the way coffee is grown and sold in other parts of the world where we have farmer relationships,” Brandon said. He cupped many of the Sidama Union’s best coffees and learned about how unions work with local co-ops and farmers. 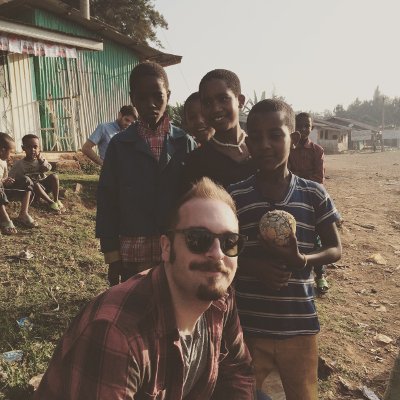 “The nice thing in Ethiopia is that they know there’s a lot of demand for great-quality coffee and are able to set their own price,” he said. “To buy the best coffees available in Ethiopia, you must create relationships – which we did. We’re bringing in some coffees we are proud of, and more importantly, our customers are going to love! Crimson Cup expects to introduce the coffees later this Spring.”

After a day in Addis Ababa, Brandon flew to the Jimma region of Ethiopia’s Oromia State. This coffee-growing region is home to the Biftu Gudina Cooperative, which produces Crimson Cup’s Ethiopian Jimma Agaro coffee.  This fully-washed offering earned a 95/100 rating from Kenneth Davids and the Coffee Review in October 2015.

“We wanted to go full circle and create a relationship that would further allow us to purchase this excellent coffee from the hard working farmers that produce it.” Brandon said.

Over the next few days, Brandon cupped numerous coffees and visited farms and co-ops. “We would go to the cupping table, find some coffees we really liked, find out where the coffees were from and then meet with the farmers and co-ops that produced the coffee,” he said. 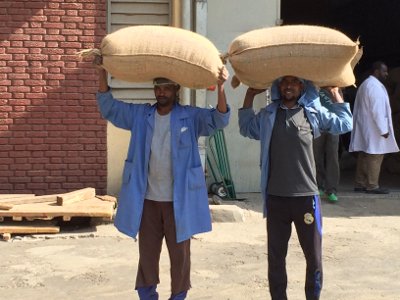 Brandon was impressed with how coffee percolates through so many aspects of Ethiopian culture. “About 40 percent of coffee grown in Ethiopia is consumed within the country – which is a ton of coffee,” he said. Every day started with traditional coffee service served in a pottery vessel with a long neck called a jebena, often served with local popcorn seasoned with sugar and salt. One day’s lunch included freshly-butchered lamb served with injera, a fermented Ethiopian bread.

Lack of roads, bridges and other infrastructure in the region requires traveling by foot in some cases, as Brandon learned while visiting the Kossa Geshe co-op and its affiliated Kabina Kossa farm. “To get there, we hiked 8.5 miles up and down two mountains – the equivalent of 519 flights of stairs,” he said. “Starting at the co-op, we walked down a mountainside covered with indigenous trees and coffee trees – all meticulously maintained – into a valley with a beautiful nursery. A lot of the coffee trees were flowering at this point, which was just gorgeous.”

From the valley, they hiked up another well-manicured mountainside to reach the Kabina Kossa farm, which has an elevation of about 7,200 feet. “It’s amazing that there are no roads to access the farm,” he said. “You either walk or ride a mule – and bags of coffee cherries are packed to the wet mill via mule.”

After retracing his steps back to the Kossa Geshe co-op, Brandon toured the wet mill and talked price and quality with co-op managers.

The next day, Brandon drove into Agaro, a city closer to the Biftu Gudina cooperative. “Lack of good roads and bridges made it a challenging trip, but we finally made it and walked down a hill to a Biftu Gudina wet mill,” he recalled. “All of the directors and managers of the co-op were in a tent set up nearby, and they kept clapping until everyone had come into the tent. They immediately offered us bread and kolo, which is a snack with barley and peanuts. Then they prepared a traditional Ethiopian coffee ceremony in traditional garb. The hospitality was amazing!”

Brandon talked to co-op managers about how wonderful their coffee was. “We discussed how it’s made a big impact in the U.S., and that it was one of the coffees we submitted for Roaster of the Year,” he said. “We told them we want to grow and strengthen the relationship.” In return, Biftu Gudina managers promised that they would continue to produce quality coffee. They also talked about recent investments in machinery that will help more than double their output of washed coffee per day.

“They want their coffee to be known all over the world for its high quality, and we committed to helping them with that,” Brandon said. “Buying the coffee at a fair price was already helping with their community initiatives, including needed improvements to roads and bridges.”

At Biftu Gudina, 50 percent of sales proceeds are returned directly to farmers. Of the remainder, 30 percent goes into a reserve that helps the co-op grow and become more efficient, and 20 percent is used for operating expenses. The co-op currently has 181 members, and the average farm has about 7 to 10 acres. In 2014-2015, the co-op produced 3.3 containers of coffee, each weighing 42,000 pounds. In the 2015-2016 season, they produced 5.5 containers.

After a tour of a neighboring farm and a processing facility, Brandon slowly traced his steps back to Addis Ababa, where he spend two days cupping, evaluating over 150 cups of coffee per day.

“Out of those cups, we hit several that were 90-point coffees, which is really exciting,” he said. “The coffees we bought will be arriving soon. Our customers have a lot to look forward to!”