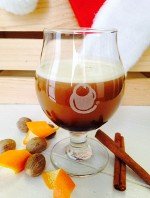 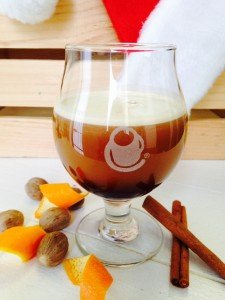 We’re excited to ring in the season with our Hopped Holiday Nitro cold brew!

Following the success of the Dry-Hopped Nitro cold brew we introduced in September, our coffee team of Brandon Bir, Dave Eldridge and Chris Shegitz continued experimenting with different coffees and flavors. They’ve brewed up a holiday beverage that showcases the flavor of the coffee without a lot of added sugar or flavored syrups.

For this new nitro coffee, we pulled a recipe straight from the pages of craft beer brewing. We wanted to replicate a spiced winter beer with some of the characteristics of a milk stout.  After several attempts, we were able to create a coffee that was full of holiday flavors, hops, and a creamier texture.

This frothy seasonal drink begins with a cold brew of our exclusive Friend2Farmer Jorge’s Pick Guatemalan coffee, which is dry-hopped with a mixture of citrus peels, cinnamon and other spices and then finished off with a small amount of milk sugar for an even bigger body and slight sweetness. Baristas dispense the cold brew through the coffee house’s nitrogen tap system to produce a frothy drink with the consistency of a fine stout and the spicy flavors of the Christmas season.

Hopped Holiday Nitro is available November 21 through December 31 (or while supplies last) exclusively at Crimson Cup Coffee House in Clintonville.